20-year involvement in the Secret Space Program, in this ongoing weekly series.

With an extensive knowledge of the Off World Colony &
Exchange Program, Secret Earth Governments, MILAB &
Black Ops Programs, Corey Goode is here to expose the
details from his 20 years of experience as an Operations
Support Specialist in Special Access Programs.

As a professional lecturer, researcher, and author David
Wilcock is helping to expose the real history of humankind’s
space explorations. He hosts Wisdom Teachings &
Disclosure on Gaiam TV and is an expert on consciousness
science and new paradigms of matter and energy.
Posted by MICAS at 9:14 AM No comments:

Email ThisBlogThis!Share to TwitterShare to FacebookShare to Pinterest
Labels: SSP 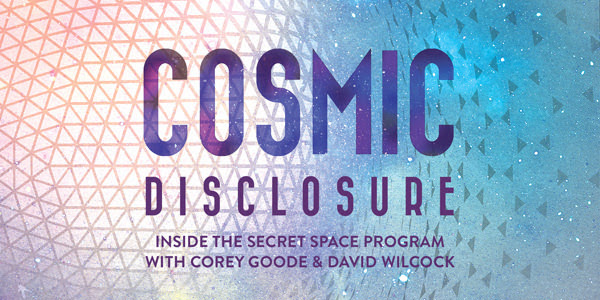 YES! See the first FOUR videos of Cosmic Disclosure -- secret space program insider Corey Goode being interviewed by David Wilcock in a groundbreaking tell-all expose'!
This is the story that has taken the UFO community by storm. Goode is the most significant, in-the-know insider to have ever come forward publicly -- by far.
Now you can watch him field a variety of questions in a fast-paced, invigorating series of interviews with David Wilcock -- and decide for yourself if this is really true.
Don't miss it!

EXCITING CHANGES ARE AHEAD
Before the avalanche of Snowden disclosures, many people still thought their own virtual world of electronic communication was a private place.
Passwords were secure. "Cloud" data encryption was actually encrypted. No one was spying on you, reading your emails, spying through your camera, et cetera.
Now it is common knowledge that a vast infrastructure of surveillance is in place. Every single thing we do is being data-mined and stored.

And for what? To defend against "Arabs With Box Cutters" living in "spider holes" and doing jumping-jacks with AK-47's?

Read More
Read more »
Posted by MICAS at 9:03 AM No comments: